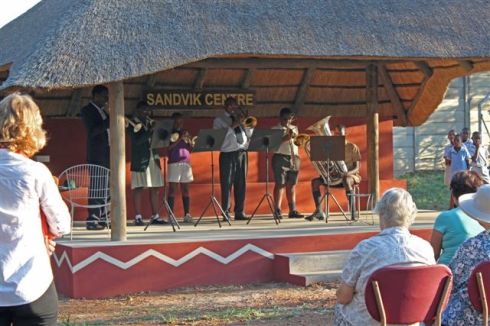 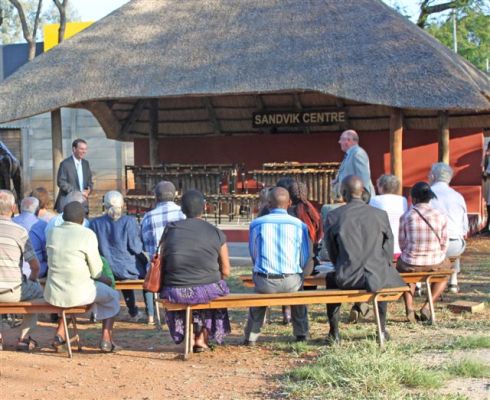 The Sandvik Music Centre at the Zimbabwe Academy of Music opened this week. Supported by a generous grant from Sandvik,  and with further support from BZAM,  the performance space will be used the Academy’s Marimba students,  and as an extra stage for ZAM choirs and ensembles.   ‘The traditional roundel gives our Marimba students a fine new platform for performance’ says Academy Director Michael Bullivant.  ‘It has been in the planning for some years – and its opening represents an exciting step forward for the Academy.   Pictured (top) Saturday School Brass Group,  (middle) ZAM Director Michael Bullibant (left) introduces Sandvik’s Ian Bagshaw, (bottom) The Sigombe Marimba Ensemble 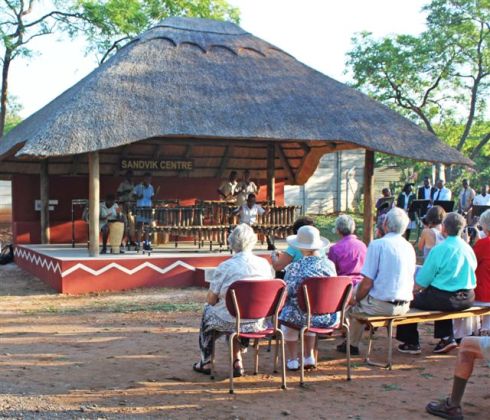 BZAM – The British Friends of the Zimbabwe Academy of Music (UK Registered Charity 1140488) raises money to support the Zimbabwe Academy of Music in its work, and help it reach out to the whole city. The Bulawayo Schools Music Project, supported by the British Council, worked with 500 young people across the city for its first major project, and aims to stage an annual community music course, with a particular focus on pupils from schools in the Western Suburbs and inner city. END_OF_DOCUMENT_TOKEN_TO_BE_REPLACED
This entry was posted on Tuesday, February 9th, 2016 at 11:38 am and posted in BZAM. You can follow any responses to this entry through the RSS 2.0 feed.
« BZAM supports new marimba centre