Christmas Celebration as 1700 turn out to hear 330 Academy Students .. 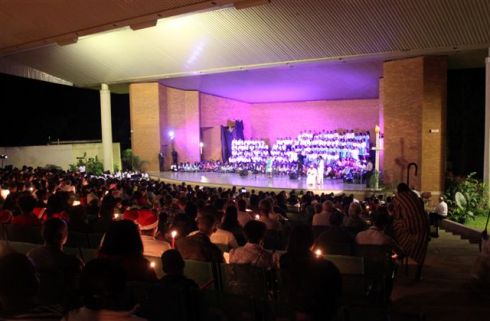 More than 1700 people brought candles to the Amphitheatre in Bulawayo’s Centenary Park on Tuesday night to join over 330 Zimbabwe Academy of Music students celebrating Christmas. The students, drawn from schools across Bulawayo, sang carols, their own arrangements of Christmas music old and new, and staged a musical Nativity play. The majority of the performers were participants in the Bulawayo Schools Music Project, which is funded by the British Council and supporters of BZAM – British Friend’s of the Zimbabwe Academy of Music.

A bumper Christmas at the Academy

British music teacher Becs Baxter is currently in Bulawayo working with students from ZAM on their Christmas showcase.  Around 70 Saturday School members will join with other students in two special gala concerts on December 3rd and 4th.

Girls’ College Choir and Orchestra and vocal groups from Convent and Petra High Schools will also take part,  performing Christmas carols,  Jonah Man Jazz and what is almost certainly the first performance in Zimbabwe of Terry Riley’s In C.

Meanwhile on December 10th, we’ll be creating another huge Bulawayo Community Choir for Carols by Candlelight at Centenary Park.   Following in the footsteps of last years Carnival of the Carnivores,  we hope more than 500 young people from across the city will join the massed ranks of forces,  with the ZAM Band and Bulawayo Salvation Army Band.

BZAM Trustee Richard Sisson will be on the ground to help marshal the enormous forces – and create another spectacular community event.  Come and join us if you are in town.

Both events are fully supported by the Bulawayo Schools Music Programme,  which is funded by British Council Zimbabwe and BZAM – British Friends of the Zimbabwe Academy of Music