Christmas Celebration as 1700 turn out to hear 330 Academy Students ..

More than 1700 people brought candles to the Amphitheatre in Bulawayo’s Centenary Park on Tuesday night to join over 330 Zimbabwe Academy of Music students celebrating Christmas. The students, drawn from schools across Bulawayo, sang carols, their own arrangements of Christmas music old and new, and staged a musical Nativity play. The majority of the performers were participants in the Bulawayo Schools Music Project, which is funded by the British Council and supporters of BZAM – British Friend’s of the Zimbabwe Academy of Music.

Bravo to all those who made last night’s Zimbabwe Academy of Music/Bulawayo Schools Music Project gala so successful.

Taking part in ‘Jonah Man Jazz’ and Terry Riley’s ‘In C’ were students from :-

They were joined by an orchestra of teachers and students at the Academy,  along with pupils from Girls’ College, Petra Primary and Sizane Secondary School.

Congratulations to all those who worked with the participants,  including Rose Green, Vusi Ndebele, Adri Botha, Ben Chiwakira, Jeanette Delport, Brian Hartman, Shirley Jerrard, Obadiah Mthombeni, Christiane Price,Ineke te Velde,  Jill Wilde and teachers from the Participating Schools.  A big vote of thanks as well to visiting teachers and course leaders Rebecca Baxter and Richard Sisson,  and Michael Bullivant and Bruce MacDonald of ZAM.

The Bulawayo Schools Music Project is jointly funded by The British Council Zimbabwe and donors to BZAM – British Friends of the Zimbabwe Academy of Music.

A bumper Christmas at the Academy

British music teacher Becs Baxter is currently in Bulawayo working with students from ZAM on their Christmas showcase.  Around 70 Saturday School members will join with other students in two special gala concerts on December 3rd and 4th.

Girls’ College Choir and Orchestra and vocal groups from Convent and Petra High Schools will also take part,  performing Christmas carols,  Jonah Man Jazz and what is almost certainly the first performance in Zimbabwe of Terry Riley’s In C.

Meanwhile on December 10th, we’ll be creating another huge Bulawayo Community Choir for Carols by Candlelight at Centenary Park.   Following in the footsteps of last years Carnival of the Carnivores,  we hope more than 500 young people from across the city will join the massed ranks of forces,  with the ZAM Band and Bulawayo Salvation Army Band.

BZAM Trustee Richard Sisson will be on the ground to help marshal the enormous forces – and create another spectacular community event.  Come and join us if you are in town.

Both events are fully supported by the Bulawayo Schools Music Programme,  which is funded by British Council Zimbabwe and BZAM – British Friends of the Zimbabwe Academy of Music 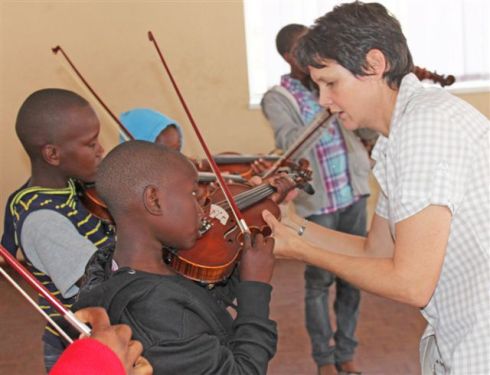 Nearly seventy young students from across Bulawayo gathered at the Zimbabwe Academy of Music on Saturday for the first of a new term of BSMP Saturday Schools. The aspiring musicians, drawn from state, council and private schools across the city, have the opportunity to study strings, percussion, marimba and brass instruments – as well as singing in the Saturday School Choir, and exploring music theory.

Once again the course has been over-subscribed, with teachers from schools in the Western Suburbs launching their own choirs and music ensembles for pupils who can’t get a place on the Academy Saturday School.

The project will run for 12 weekends through until the end of the year, culminating in a series of concerts at the Academy. Watch this space for details.

The Saturday School’s are part of the Bulawayo Schools Music Project, jointly funded by the British Council Zimbabwe and the British Friends of the Zimbabwe Academy of Music. If you are based outside Zimbabwe, and would like to know more about BZAM, or help support its work, please contact the trustees via email – contact@bzam.org.uk